Hard at work or hardly working? It’s been a little of both. However on my off time, I’ve managed to stumble upon quite the little treasure chest of desserts for the holidays. Of course there is no shortage of anything Christmas themed, but I don’t want to jump the gun. I love Thanksgiving and I believe it deserves its own time and affection. I haven’t been able to narrow it down so I suppose I will end up making a couple of desserts for the table.

In the mean time, my mother asked me to whip up a Triple Berry Tart for her book club meeting. Only problem being the recipe calls for a tart pan with a removable bottom, which we don’t own. My mom has never had any love for better-than-basic cook wear. Being the amazing daughter that I am I endeavored to help her out anyway and I was very pleased with the results. 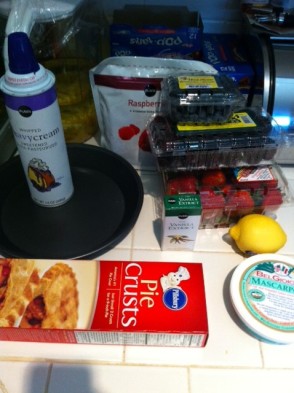 1. Prepare pie crust according to the instructions found on the box. Instead of the bottomless tart pan I used a regular 9 inch pie pan and had absolutely no problems with sticking. Make sure you poke hole in the bottom and sides with a fork to avoid bubbles (mine had more than I would like). Bake in the oven (temp on the box) until golden brown (about 8 to 10 minutes). I immediately thought of a ritz cracker the second it popped out of the oven. Then I realized that I definitely need to figure out the proper way to put holes in the crust because the bubbling pulled the sides away from the pan. I also found the tucking and bending of the edges tedious and must find a more efficient way to achieve that look. Remove from the oven and let cool completely. 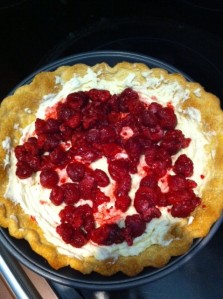 2. In a large bowl, combine the mascarpone cheese, heavy whipping cream, sugar, vanilla extract, and grated lemon zest. Beat with an electric mixture at medium speed until stiff peaks form. At this point I checked the crust to make sure it wasn’t stuck to the pan. Spoon the cream mixture into the now cool crust, spreading evenly.

3. Gently combine the strawberries, raspberries, blueberries, and blackberries. I couldn’t find fresh raspberries so I had to settle for semi-solid frozen raspberries. Because I had less to work with I added more of the strawberries (they are my favorite) to fill out the pie. I also put the raspberries at the bottom to add red throughout the pie, but also to hide their mushy-ness.

*It can be assembled beforehand, refrigerated, and brought to room temperature before serving.